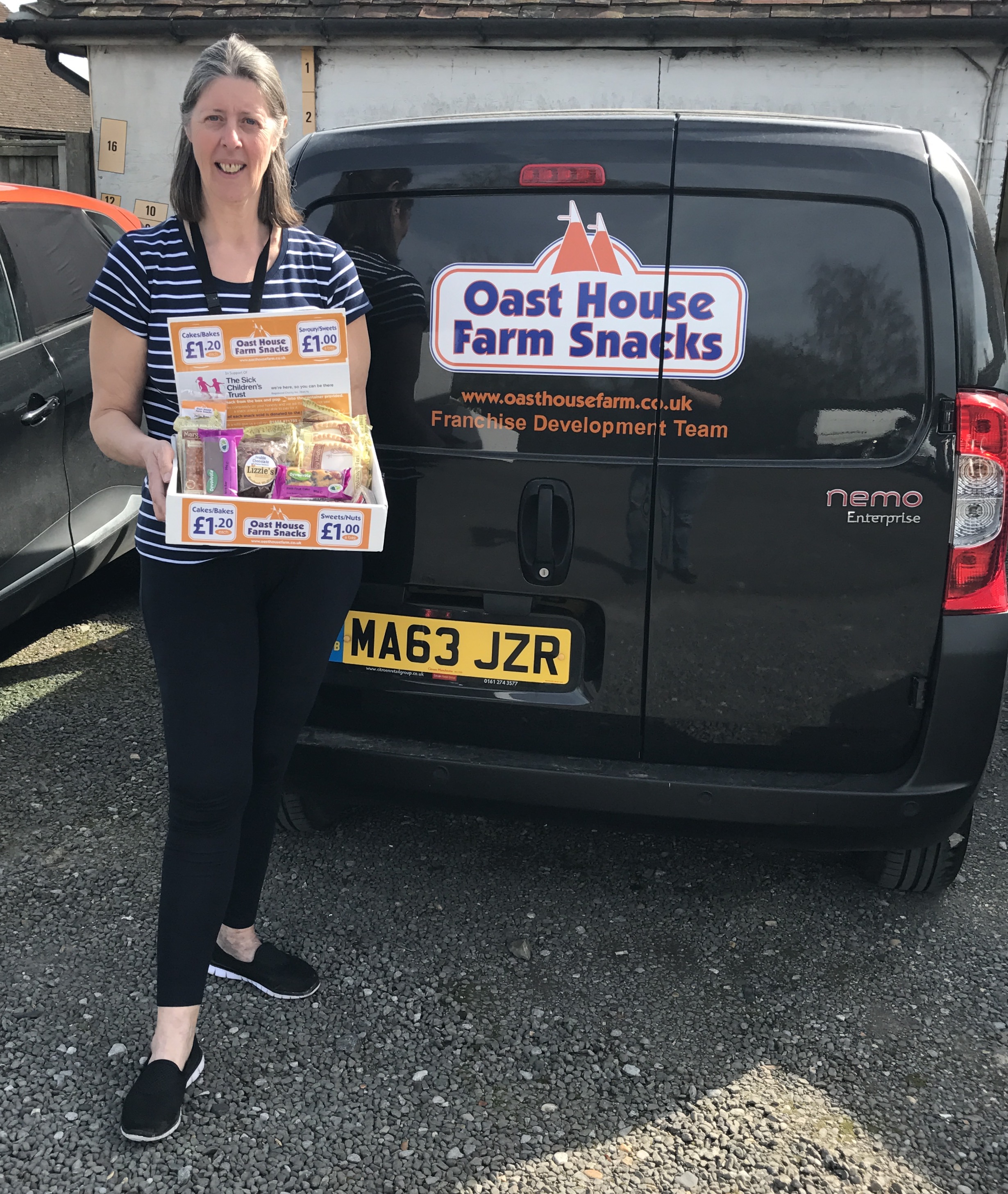 “Everywhere I go, they know me as the Cake Lady!”

When Helen Nash left a stressful job behind to take a job with  Oast House, little did she realise that it would lead to her running her own business… and earning herself a rather fetching nickname!

Helen ran a Post Office for eight years. She says: “I loved the job but the rewards weren’t enough for the responsibility, it was too much for very little back. I took a job in banking but I found it boring! So I started out with Oast House as an employee in March 2015.”

That was to prove just a stepping stone, with director Matt Simmonds franchising the snacks business just a few months later. Helen explains: “Matt kept telling me I was doing very well, and then mentioned about taking on a franchise. To be honest, I didn’t really understand what a franchisee was. We spoke about it, with my husband too, who said afterwards ‘I don’t know why you don’t just do it’. So I did!

“It was quite nerve-wracking. I realised I’d have to take on doing my own tax and accounts. But Matt and his team helped me so much – the support I’ve had has been brilliant and made such a difference when I started the business.”

And since then? “Business is going very, very, very well! I’m so pleased that I did it.”

So well in fact that Helen, who operates along the south coast from Worthing to Newhaven, is the top-performing Oast House franchisee.

So what’s been the secret to her growing turnover and profit? Helen says people skills are her biggest asset.

“I guess it’s my personality,” she says. “I’m chatty, I like to talk to people – in fact everywhere I go, they all know me as the Cake Lady!

“I get to know what people want, what they don’t want. People skills are very important. You can’t just drop in a box and then leave. I make a point of letting people know that I’m here so that they know that the box has been refilled and they’re ready to clear it out again!”

That approach has led to a focus on growing the number of snacks delivered to each customer. She explains: “The best thing is to increase the stock in a box. For example, I go to a business in Eastbourne, and started off with 18 cakes; we’ve increased repeatedly and now I leave over 50. I even get asked things like ‘Can you leave me at least 5 Eccles cakes?’ Of course I can! Sometimes before I’ve even driven off people have bought more than one.

When it comes to gaining new customers, Helen says the right attitude is crucial. “I generally go to businesses with a manned reception, it’s much easier. You introduce yourself, take in a box and see how it goes. If it’s a flat no then that’s OK, you’ve just got to expect some of those and not let it get you down.”

When it comes to the all-important work/life balance, Helen says: “This business is so adaptable. I leave at about 7am and do 30 or so pick-ups a day, and I’m back home for 2pm or so. I still have to restock my car on a daily basis and I have to do banking and put my figures into the computer – but because it’s your own business, you don’t mind doing it!

“My franchise is giving me what I wanted and expected, and much more. I thoroughly enjoy it. I love going out to all the different places and chatting with people. You don’t get that kind of variety in a lot of roles.”

As for the future potential, Helen adds: “There’s so much opportunity out there that you drive past every day. I think to myself ‘I wonder if they’ve got a box?’ As long as I have enough stock and enough time, I’ll call in.”

Asked for her top three tips for those looking to emulate her success, Helen is clear.

“You have to be very, very organised; you have to be motivated to get out and do the best you can; and you must be prepared to work hard. If you do, my results show that the rewards are there for you. And I know a thing or two about working hard without enjoying the rewards!” 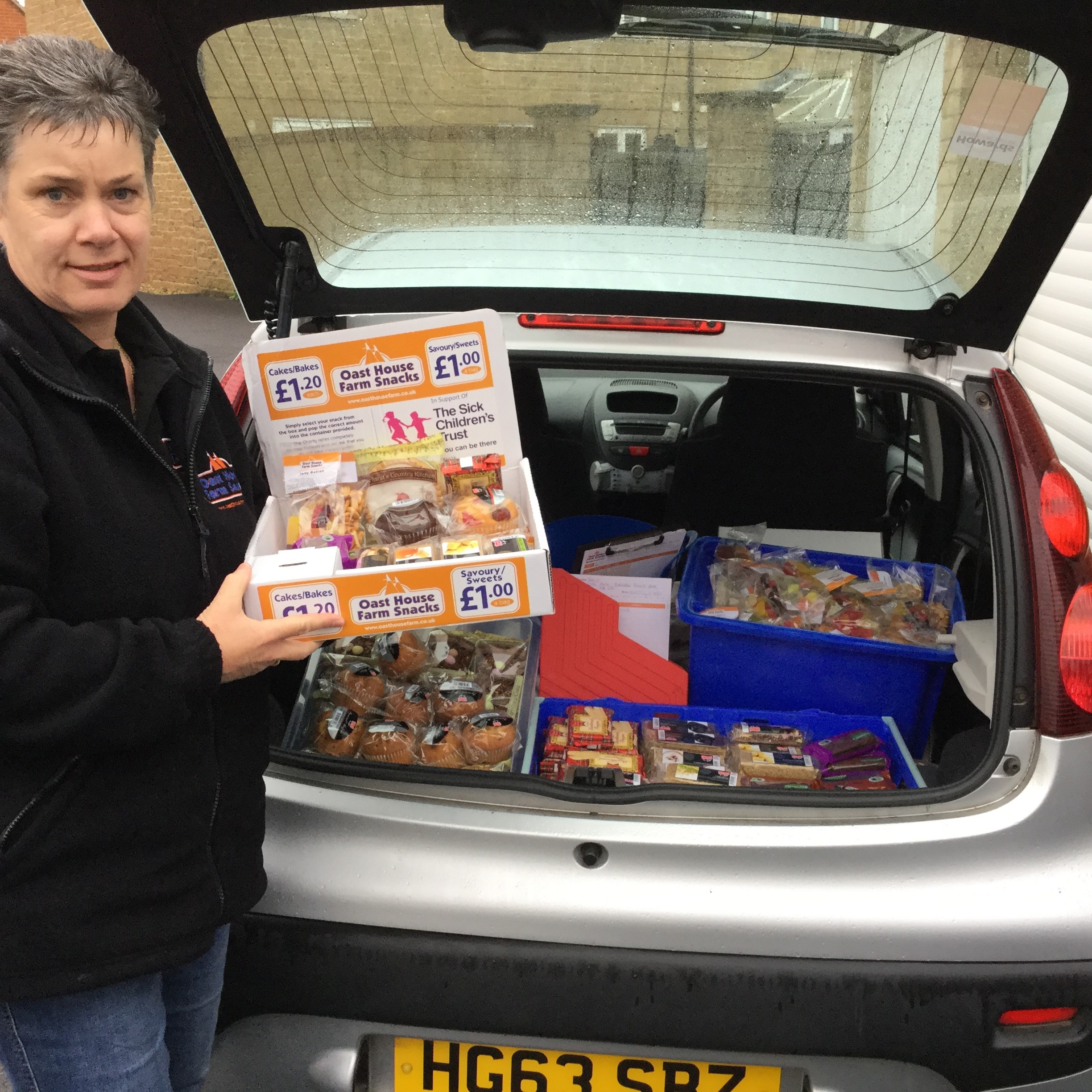 From Redundancy to Thriving Business Owner with Oast House

“I’ve had support every step of the way and I see a bright future ahead.”

Former GB lawn tennis champion Rachel Apsey was working for a door-to-door tea delivery company which was forced to make redundancies in autumn 2016. She’d already developed glandular fever, including the debilitating ME effects of the illness, so it was a difficult time both personally and professionally.

Then she came across Oast House.

“I was looking online at different avenues and Oast House jumped out,” says Rachel. “It sounded really good and was similar to what I was doing in the past. I rang Matt Simmonds, the franchise director, and he came down to see me. That’s where it all started.”

The new business not only gave Rachel the chance to manage her illness in a way that suited her, thanks to the flexibility of the Oast House business model; it also provided the opportunity to tap into her previous experience of delivering books and gifts into workplaces. Now she provides snack boxes to local companies while supporting national charity, The Sick Children’s Trust.

Starting her Yeovil-based business at the end of November 2016, Rachel now has close to 200 boxes in various workplaces, with plans to grow to 300 or so in autumn 2017 – less than a year into her new venture.

Rachel says: “I see a bright future ahead. Once you get your core base of boxes in to the right companies then there’s a lot of growth potential. I don’t mind cold calling at all. If I lose a few boxes yesterday, I’ll try to find three new customers the same day if possible.

“Getting the boxes in in the first place is the hardest part of the business, but once you’ve got them in there, it’s really nice to go in and see familiar people every week and build up a relationship with them.

Rachel is quick to pay tribute to the support she’s enjoyed from the Oast House head office team, which gets each franchisee’s business off to the best possible start by placing the initial boxes ready for collections to begin.

“Trevor, my area manager, has been a great help in my early growth,” she says. “You also have the support of Matt and Natalie at head office, and Suzanne who does the accounts. If I’ve got a problem I just pick up the phone and they’re always there to help.”

So was it a smooth transition into building your own business?

“Completely. You get the manuals from head office and support every step of the way. From day one once you’ve got your boxes out, on your first day of collecting you’ve got money coming back in. And the computer system is straightforward, not too complicated to follow!”

When it comes to the issue of managing the ongoing effects of glandular fever, Rachel says her business is perfectly suited.

“I still get tired but not like I was, I pace myself to manage it. It was six months before I could do anything after being diagnosed and I’m back playing tennis now! I play for the GB veteran’s team competitively and it’s thanks to the flexibility in the business that I’ve been able to get back so quickly.”

That might be a ‘nice problem to have’ again in the future as her growth continues. Rachel concludes: “I try and do up to 40 calls per day, but obviously when I get 300 boxes out I’ll have to calculate the best way to manage that!”